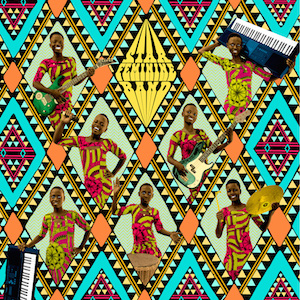 A group of 7 girls, aged between 10 and 17 years old, Star Feminine Band are from a remote town in Benin. They make psychedelic African music and sing about their personal struggles, empowerment and female genital mutilation

In 2020 Ballantyne were contacted by Born Bad Records with a proposition to get behind and bring awareness to an all girl group from Benin who had recorded an album off the back of a radio call with the aim of giving young girls an opportunity to learn and play music. A total anomaly in Beninese culture, these girls were ready to shake local and national norms and despite their young age and an abundance of pressures connected to customs and traditions, the group have taken some extraordinary furtive steps.

Ballantyne were responsible for the UK publicity campaign (press, online & radio) with additional aim of increasing awareness in the USA and other parts of the world. Substantial editorial was won including a major print and digital piece in The Guardian, cross the board album reviews in music press and crossover success with US non-music websites like Pee Wee Herman and Boing Boing popularising the band and Apple Music's Mat Wilkinson leading support. The group have built a major fan-base at BBC 6 Music and have been played hundreds of times across the US college radio network.

"This is manufactured pop at its most joyous...utterly glorious" Uncut 7/10 + track featured on CD covermount

"Star Feminine Band are so much more than a captivating curio. They’re a game changer" ★★★★★ Songlines

“A heartwarming back story doesn’t guarantee great music. The girls themselves have done that, familiarising themselves from scratch with their instruments, and melding into a exhilarating ensemble” Metro

Album of the Day Bandcamp